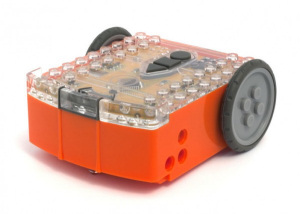 Edison is programmed using EdWare, an icon based graphical programming language. Programs are downloaded to Edison using the EdComm cable. The EdComm cable plugs into the computer's headphone jack and carries a pulsed audio signal to a high efficiency LED. The LED converts the pulsed audio signal into light that is received by Edison's line tracker phototransistor and loads the program into the processor.

Battery: 4 x AAA (UM 4)
MyBrick Privacy Policy
©Copyright MyBrick.com.au:
LEGO® is a trademark of the LEGO Group of Companies which does not sponsor, authorise or endorse this website, the MyBrick company or related products and services.
Website Architecture by: D.D.Designs